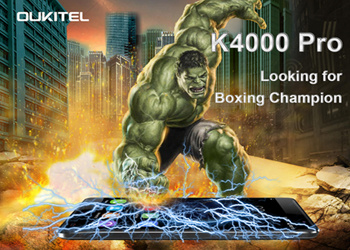 Have you ever wondered if the K4000 Pro is going to break if you Punch it hard with your fist? Well, Here is the answer.

K4000 Pro has been on sale for a period, its toughness and lifetime has been proved by many fans. As K4000 pro’s tough screen is spreading globally, many stores in China selling this model teamed up to organise a boxing test for the K4000 pro, they invited consumers and passers-by to experience the toughness of the K4000 Pro’s

screen, which is “Looking for Boxing Champion”. Many of them stopped by to witness the boxing show.

Most of the fans were surprised and doubted that it will break the phone. But after they saw the video

of K4000 Pro being used to knock nails in and out of wood, they were wowed and punched it freely, see the video below:

Now during the spring flash sale season, K4000 Pro is sold mostly only at $99.99. You can still get it from one of the stores in Aliexpress: BlackPeach