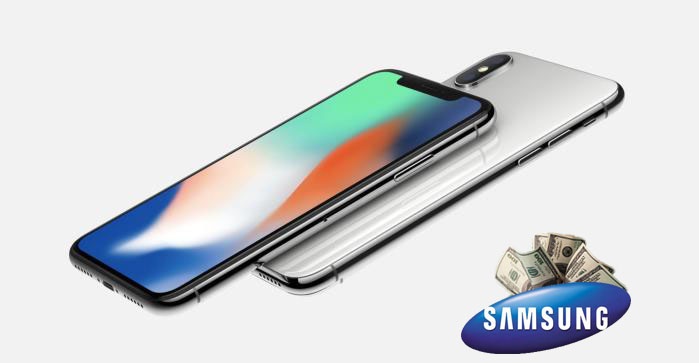 iPhone X is undoubtedly the future of Apple smartphones and even though it came with a jaw dropping price tag of about 1,200 USD (432,000 naira), it is likely to be Apple’s best selling smartphone ever.

iPhone 8 and 8 Plus which were also unveiled alongside the iPhone X are already on sale but the sale is quite reasonably slow and this has been linked with people waiting for the iPhone X.

Samsung also stands to benefit hugely from the sale of Apple’s iPhone X devices, thanks to their OLED screen and a couple of other components the phone is fitted with.

Apple phones have been using Samsung’s components and that is the same case with the new iPhone X. The device sports a Samsung OLED screen, batteries and capacitors and NAND memory chips.

According to an analysis that was carried out by Counterpoint Technology, Samsung will make $110 on every iPhone X sale and with Apple slated to sell 130 million iPhone X phones by Summer 2019, Samsung will bank billions in revenue from their affiliate with the Canadian company.

The analysis further suggests that Samsung will earn more from iPhone X sales than its own Samsung Galaxy S8 that is being sold for $720 (with $202 as profit for Samsung), the S8 is projected to reach over 50 million sales and over 40 million for Samsung Galaxy Note 8.

The two tech giants will definitely be looking to forever interlink in terms of partnership. Samsung wants to retain Apple as probably their best customer, while Apple needs the unmatched production capacity of Samsung to meet demand for its phones and other devices.