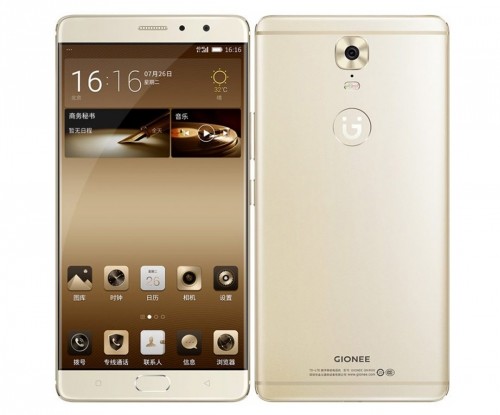 Gionee launched the M6 and M6 Plus smartphones at an event in Beijing not very long ago. Both smartphones comes with an inbuilt data encryption chip that ensures extra security of user’s communication and content but before getting excited about that, its an all Chinese affair.

Both the smartphones will be made available in Champagne Gold and Mocha Gold colour options, one of the selling points of the M6 and M6 plus is the data encryption chip embedded inside the smartphones. This brings the ability to protect users from malware, while also securing IM communication content from being decrypted easily.

There is a provisional 64GB and 128GB storage options with the option to expand further up to 256GB via a microSD card slot.
Cameras available are 13-megapixel rear camera with PDAF and LED flash and 8-megapixel selfie camera. The Gionee M6 packs a huge 5000mAh battery which claims to last up to 6.4 hours of video playback, 55 hours of continuous call, and 794 hours (33 days) of stand-by time.

It also supports fast charging technology, and the company claims that the M6 can fully charge in just two hours, similar feature we saw in the Oukitel K6000 pro.

The fingerprint scanner is housed inside the home button in the front panel, it can be used for security purposes on the device.

For the Gionee M6 Plus

It is the larger one in both devices having a 6-inch full HD (1920×1080 pixels) Amoled display space. The smartphone sports a 16-megapixel rear camera with dual LED flash, and an 8-megapixel front camera.

There are no much differences between the M6 and M6 plus but it’s handy to spot out the few differences in both device.

Detailed specs of the Gionee Marathon M6 and M6 plus