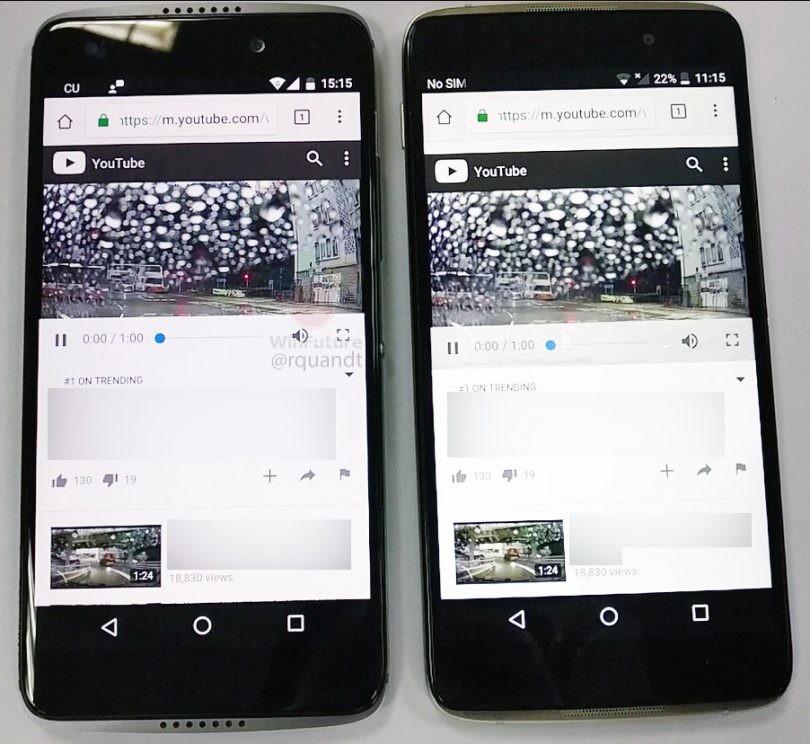 By now, we are pretty much expecting Alcatel to be releasing the successor to the Idol 4 lineup. The Alcatel Idol 5S shouldn’t be much different: a main flagship model that is followed by one, two, or a few variants of the same parent model. But what we are learning this year is that Alcatel might release the “S” model as the normal-sized 5.2-inch model that would be available globally.

The naming might differ from last year; Alcatel’s Idol 4 while the United States got the Idol 4S. This was a slightly larger device with a 5.5-inch screen and a bundled VR headset. According to Roland Quandt, a leakster on Twitter, the device photographed is meant for Cricket Wireless.

Naming scheme aside, the new Idol series is getting a facelift on the upper and lower speakers. We loved the Idol 4S’s dual-direction speakers and we hope it makes a return on the next Idol device. The Boom key on the right side looks to have moved down a bit and there doesn’t seem to be a power button on the left-side (though it could be due to the angle that the photo was taken).

Otherwise, the phone looks pretty similar to the Idol 4. The back of the Idol 4S had a really funky reflective pattern that centered over the fingerprint scanner, reminiscent of the reflection you’d usually see on the shiny side of a compact disk. We can’t wait to see what Alcatel has done to the back of the Idol 5(S).

This is not the first we’ve actually heard of Alcatel’s new flagship model. Back in March, the phone has been spotted on GFX Bench where some of its specs have been outed. Likewise in February, the same device was run through GeekBench. Both of these spec sheets show that the device running an octa-core MediaTek MT6757 chipset with a Mali-T880 GPU. There are also 3GB of RAM and 32GB of on-board storage. In the camera department, there might be a 12MP main camera and an 8MP front-facing sensor.

We wonder if the 5.5-inch Idol 4S will get a true successor, one that sports a 5.5-inch display and a Qualcomm processor. Perhaps an Idol 5S Plus?