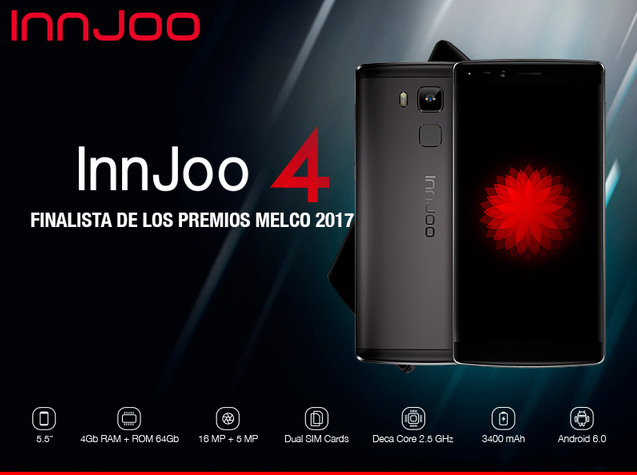 For the second time in a row, InnJoo makes it to the final of the Melco Awards, thanks to the InnJoo 4 innovations.

Melco Awards is a business show that is set to take place this coming June 6 and 7 at the Palacio de Congressos de Zaragoza.

This time, InnJoo has been nominated in the category of “Best Smartphone”; InnJoo 4 being the smartphone that made them get into the category.

The defense will take place in an open space where any participants that wish to attend will be allowed to do so, alongside the judges in order to achieve greater transparency in the process of choosing the winners.

The defense of candidacies as well as the election of winners and the Awards Gala will take place on the first day of the event which is Tuesday, June 6.

In the event, InnJoo will present some of its innovations such as the InnJoo 4; a smartphone allows users to get the most out of their 2.5GHz Deca-core processor. Its 3400mAh battery fully charges to 100% in about 1 hour and can achieve 220 hours in standby and 15 hours in talktime. The smartphone comes with 4GB RAM, 64GB internal storage and supports micro SD cards of up to 128GB.

Interbox, which is the organisation sponsoring the Melco Awards will have the fifth edition of the Melco in two zones, an exhibition area where the manufacturers will present to the public their innovations, as well as an open space where buyers meet with the manufacturers.