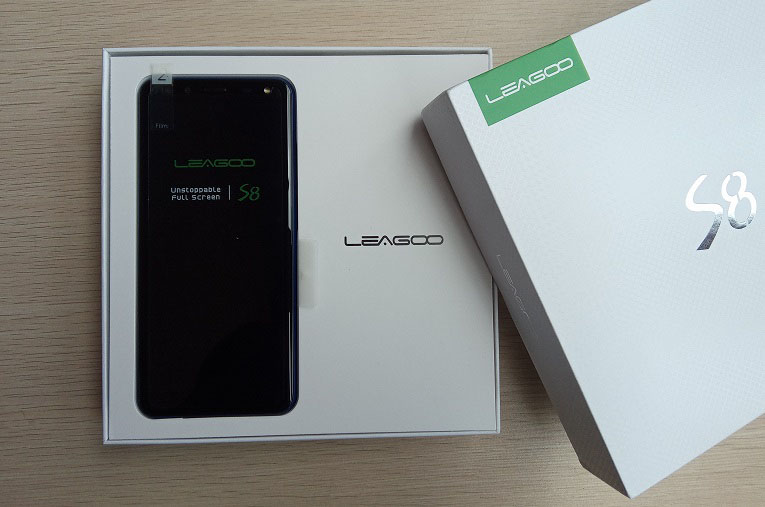 With the launch of the Leagoo S8, this Asian OEM has now proved that we can surely get a premium device and not have to break the bank for it.

Looking at the form factor of the device as well as the kind of naming system it got, one cannot miss the fact that it was modelled after the popular Samsung Galaxy S8. This touts itself as the best alternative to the Galaxy S8 and frankly speaking, we could not agree less.

Now that Leagoo has brought their mobile care platform into the country (Nigeria), it has become less risky to purchase this device for the fear of lack of support should anything happen to your beloved phone. However, that is not wat would make you whip out your wallets and credit cards for this unit.

Complete with a quad camera setup (yes! 4 camera sensors), a sleek design and the latest 18:9 aspect ratio to boot, follow through with this unboxing and see why you should rather buy this smartphone next.

The box design is a rectangular white mass with the name of the phone (S8) boldly printed in the middle. Somewhere along the edges is the tag that references the manufacturer. On opening the carton, you come in contact with the Leagoo S8 facing upwards at you. 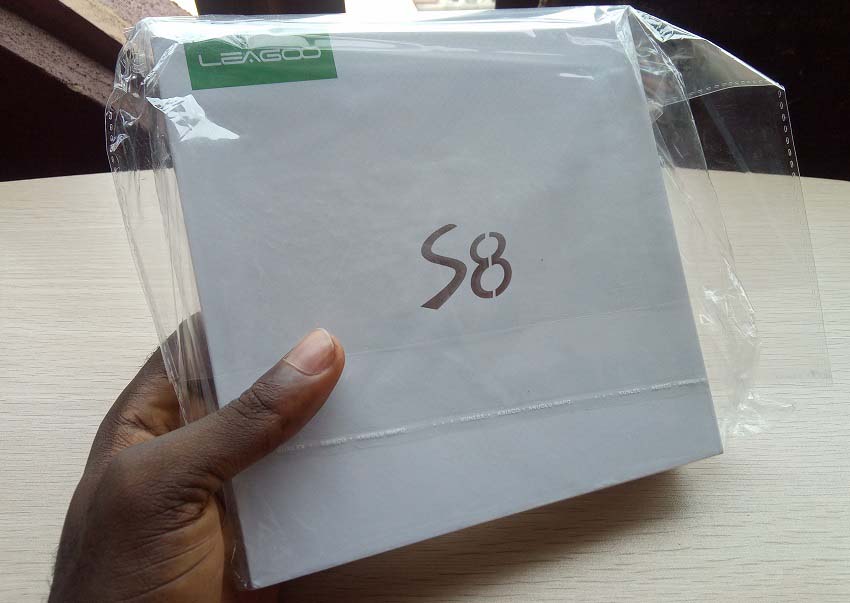 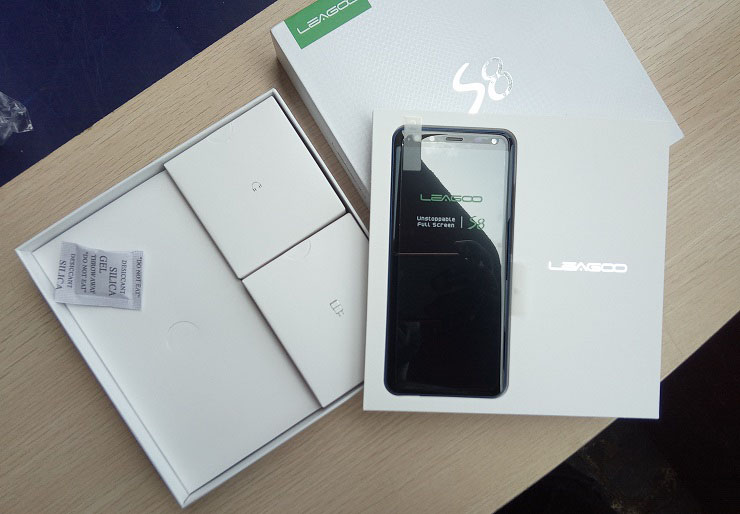 Inside the S8’s box are some quite familiar components – a pin for ejecting the SIM/TF card frame, a 5v-1.5A output charger, the USB cord, user guide, warranty certificate and a protective rubber case. 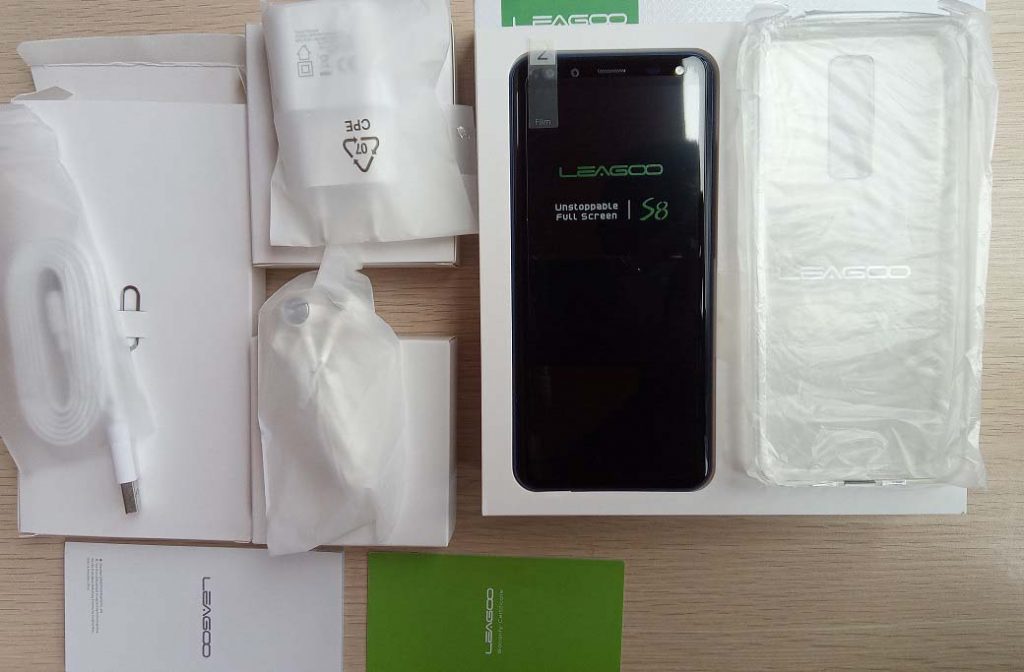 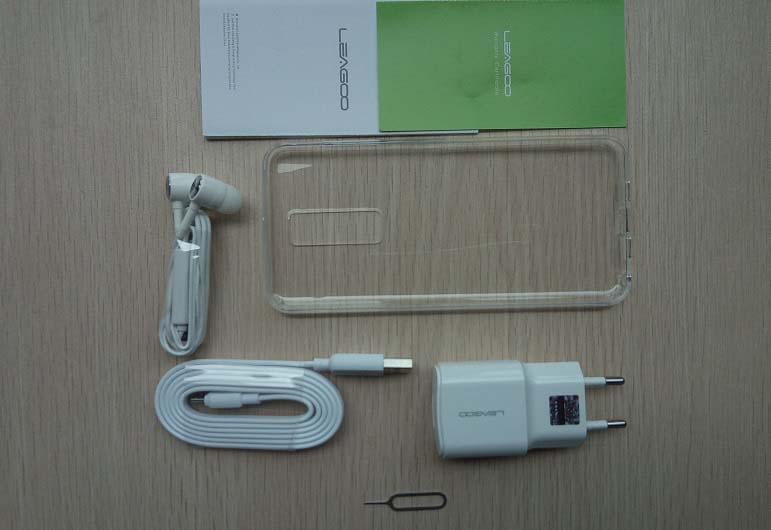 At the first touch, the Leagoo S8 is lighter than expected of a phone coming with a metal unibody. Of course, the glossy finish on the back makes it a very beautiful on to look at. You will want to be careful with smears though as the back panel looks like a fingerprint magnet. 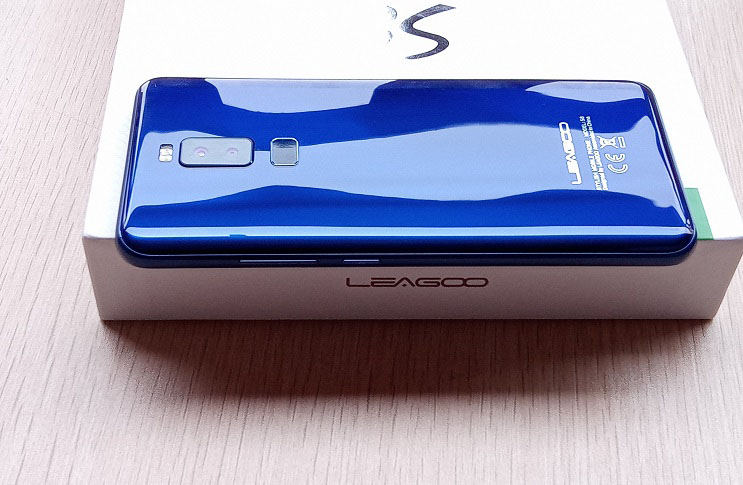 On the top bezels is located a dual camera setup for selfie and facial recognition purposes. The first camera is rated 8MP with a sub 2MP snapper to it. To the right of these cameras are Notification LED and a soft LED flash to better selfie capturing in low-light areas. 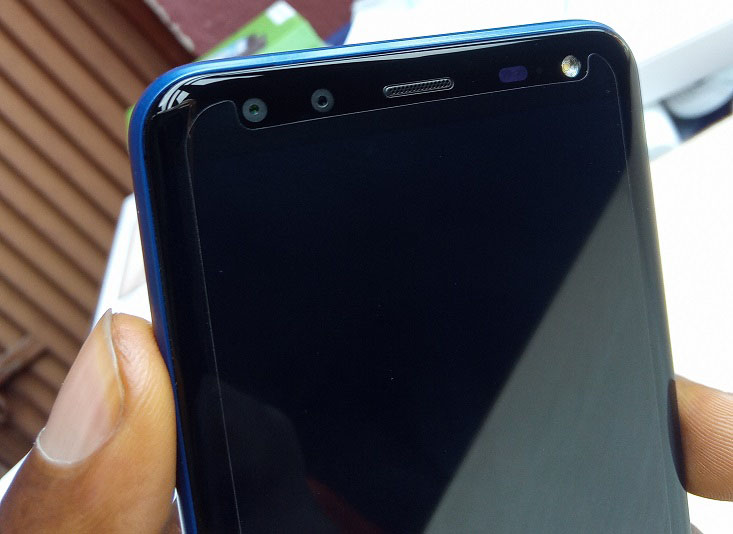 At the very top of the phone is the SIM and microSD card tray. Making use of a hybrid SIM slot, you will have to make a decision between using a second SIM or sacrificing that slot for a microSD card.

We love how the headphone jack was situated at the bottom of the phone. At least, that will reduce cases of headphone/ earphone wire fatigue and internal breakages. With the headphone jack is a speaker grill and microphone section, rounded off by the USB slot. 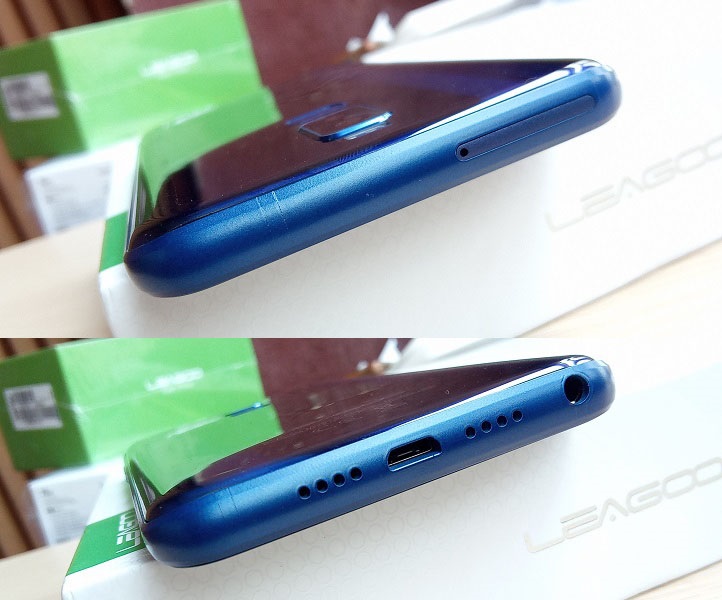 To the right, we have the volume rocker keys and power button. A bonus tip we should throw in here is that you can take screenshots on this unit by holding the Volume Down + Power buttons at the same time. 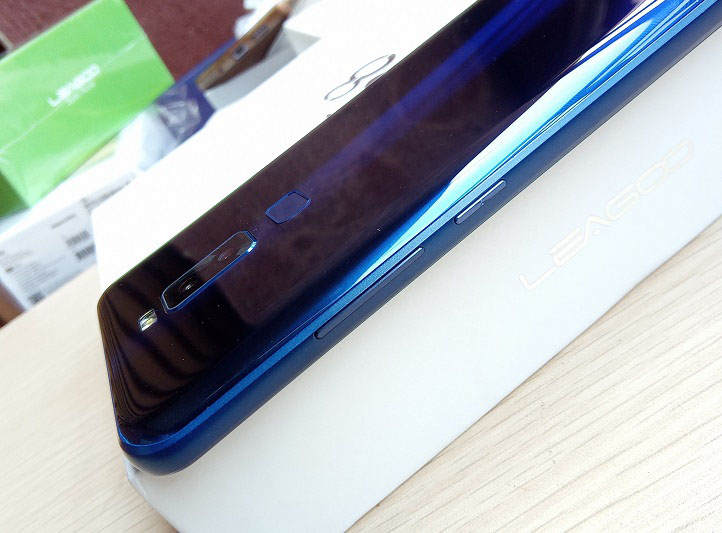 Finally, we come to the back of the smartphone which has a glossy feel to the hand. At the upper part is another dual camera sensor (13MP + 2MP) underneath which is a nicely-cut fingerprint sensor location. To the top of the cameras is a LED flash for image and video illumination. 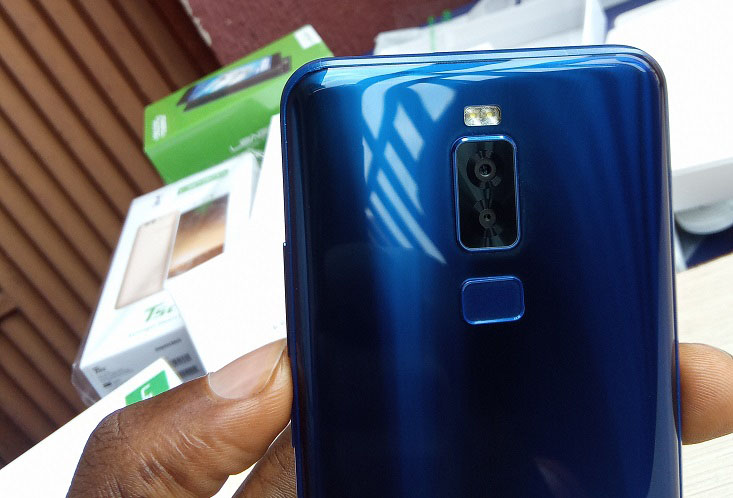 The Leagoo S8 crams a beautiful 5.72-inches elongated screen, all thanks to the 18:9 aspect ratio selection. The screen comes with a 2.5D curved glass, it uses an on-screen navigation keys so there are no physical buttons on the screen. 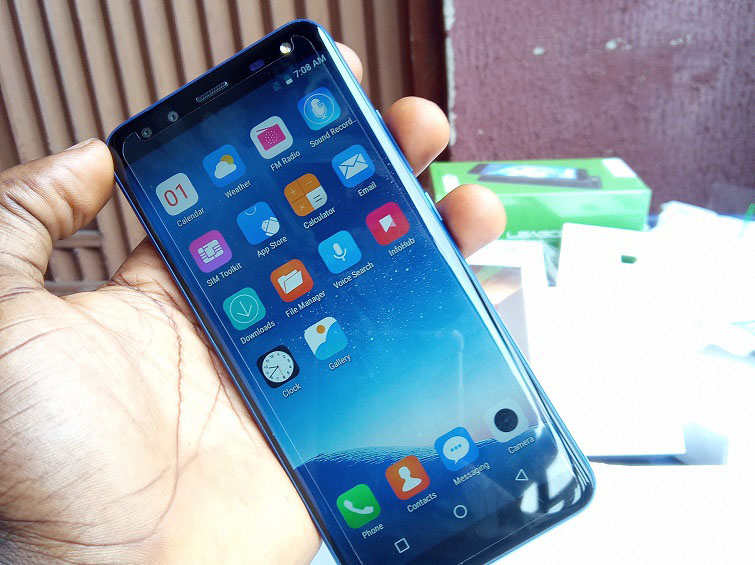 The phone has a display resolution of 1440 by 720 and 294 pixel per-square inch (PPI). Colors came out very sharp on the display with distortions. The display has multi-touch function and supports up to 5 fingers at the same time. 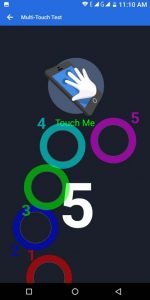 Running Android 7.0 Nougat out of the box, the Leagoo S8 could be on par to get Oreo 8.0 if all goes well. The interface is quite nice and we like the fact that Leagoo has limited the bloatware on the unit to almost none.

Having to deal with the Default Home Launcher (which can be changed to another one you love by the way) and an internal App Store is something we can live with. below are some screenshots of the S8’s user interface; 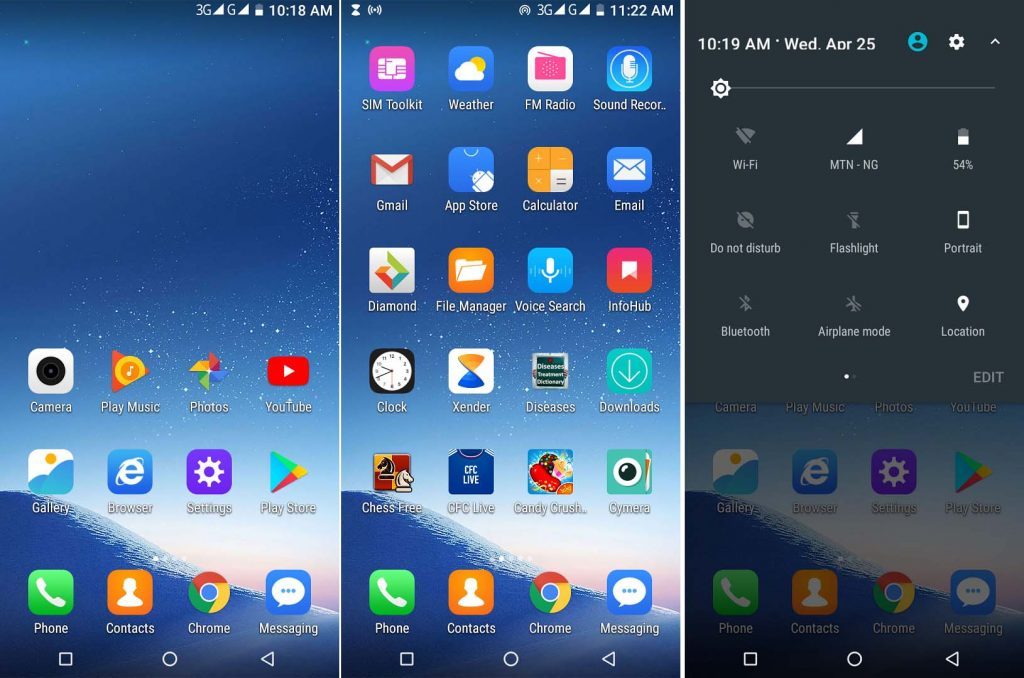 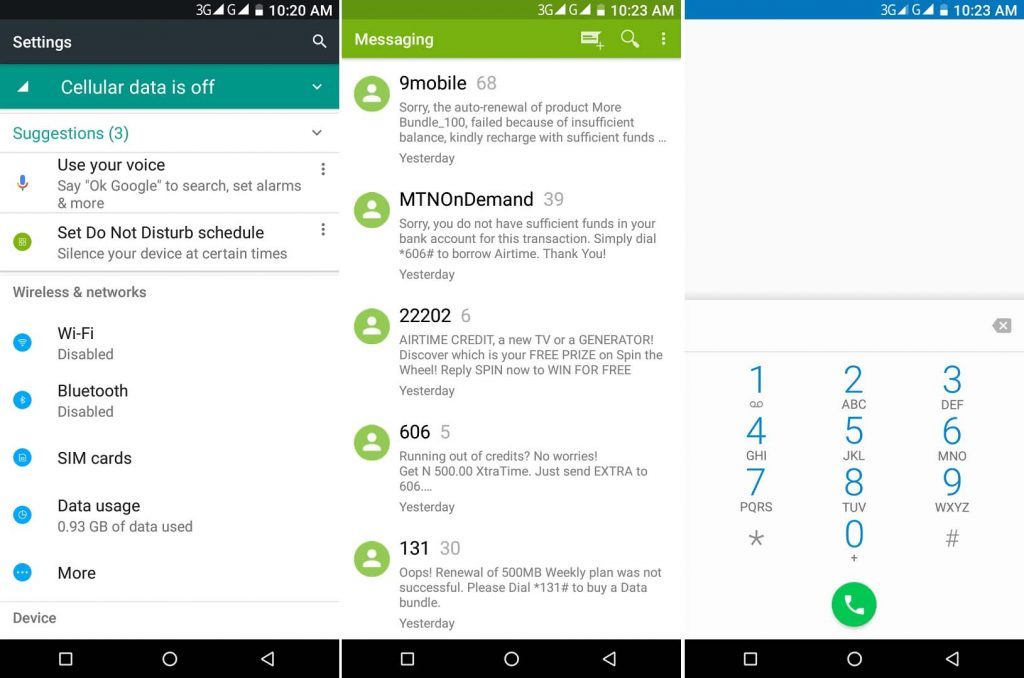 As you can see from the screenshots above, there’s no app drawer button, all the apps are listed on the home screen. You have a wide array of home screen themes to choose from, if the default theme doesn’t entice you. 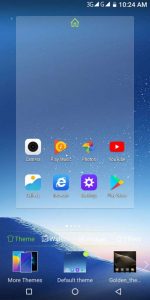 In the processor section, this unit packs a 1.5GHz octa-core CPU and then marries that to 3GB of RAM. It will be no surprise to say that the smartphone held its own quite well when we gave it multiple tasks to handle at the same time. 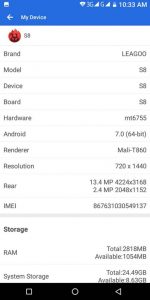 The Leagoo S8 features a fingerprint unlock system and just as seen in most Android devices, the fingerprint sensor is positioned at the back just below the camera.

Unlocking the device with the fingerprint scanner appeared to be easier and faster. You just have to place a registered finger on the scanner for less than a second to unlock the device. You can also use the fingerprint security feature to do so much more – control app permissions, secure accounts, etc.

Coming down to the Benchmark tests, the Leagoo S8 squeezes in among the top contenders in this aspect. The tested the device with the AnTuTu Benchmark app and it came out with the score of 49,013. 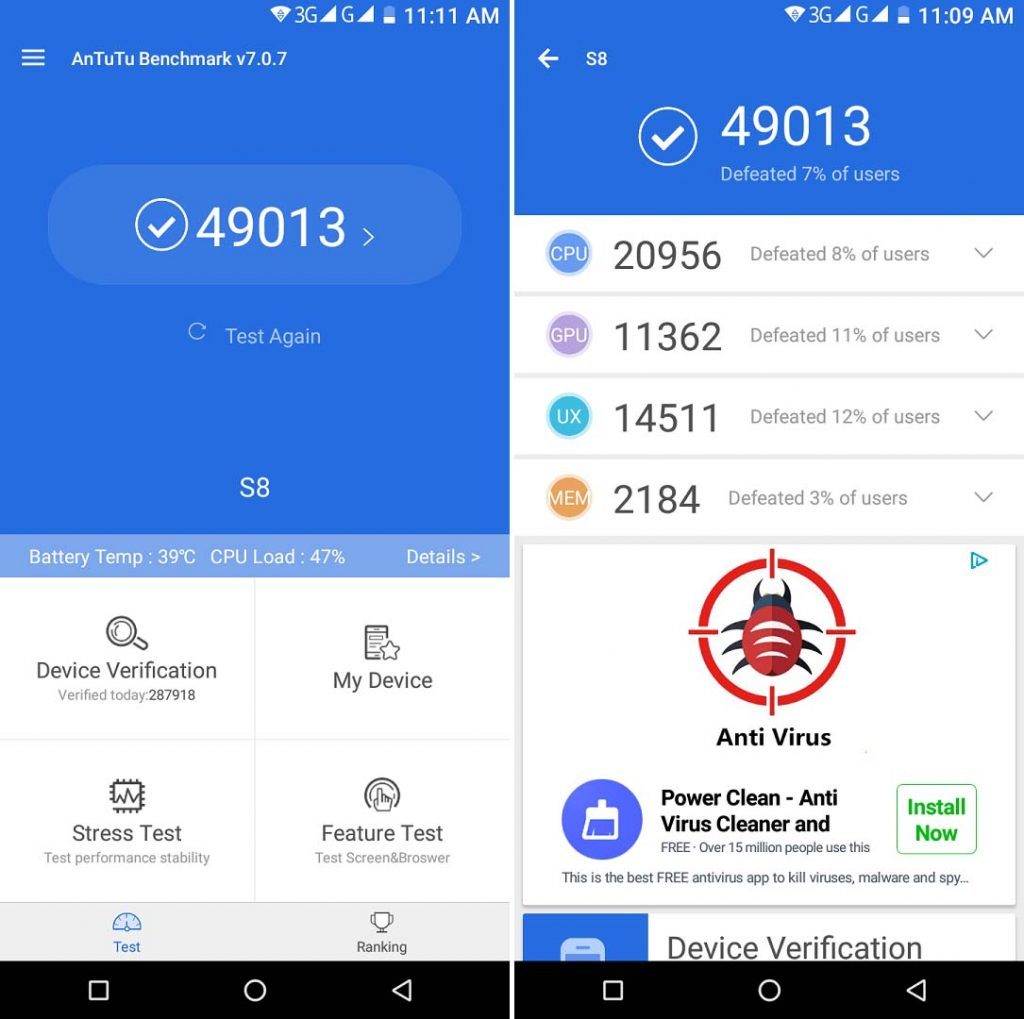 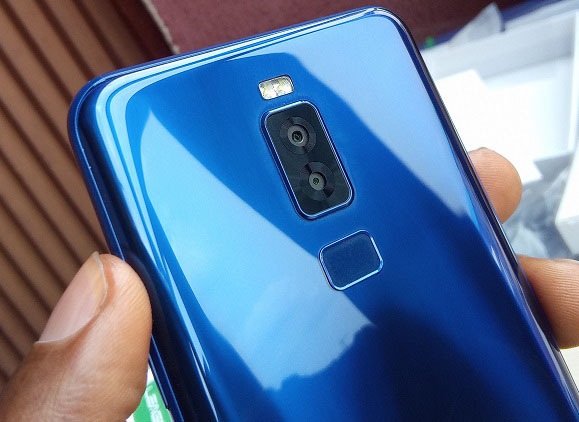 For photography purposes, the Leagoo S8 is having a dual rear camera setup that sees an 8MP + 2MP pairing on the front. There is a provisional LED flash for optimal photography in low-light conditions. 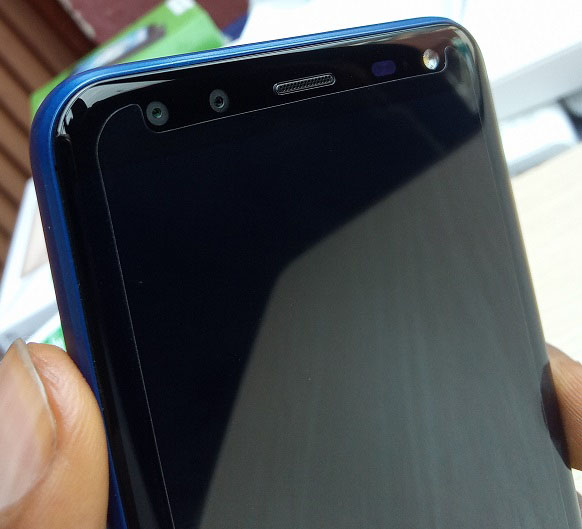 If you think that’s impressive, wait till you check out the back where there is a 13MP + 2MP camera configuration instead, also with its own LED flash. The cameras on this unit is no doubt phenomenal, so much that it has gone on to be compared against its main rival – the Galaxy S8. 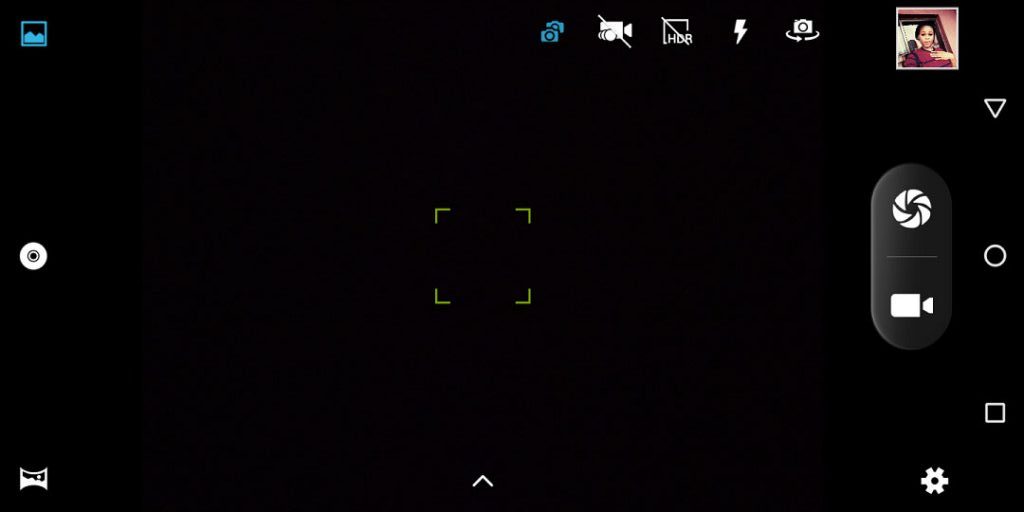 Below are some indoor pictures that were taken with the phone’s back camera, click on each one to enlarge. 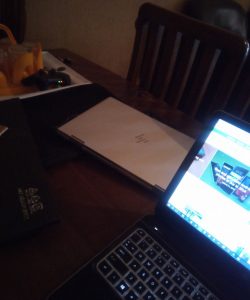 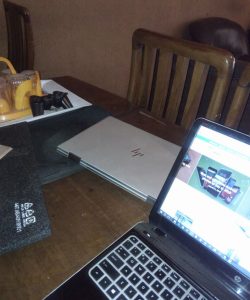 Below are some outdoor pictures that was captured with phone’s back camera. Click on each one to enlarge. 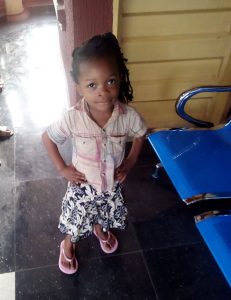 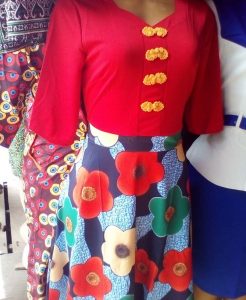 Below are pictures that were taken with front camera, the picture quality was very impressive, see for yourself below; 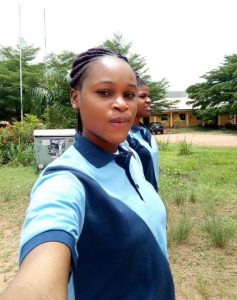 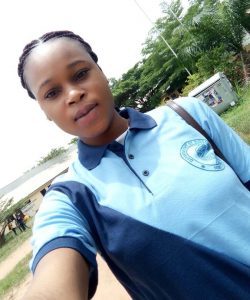 Leagoo got everything right with the S8 so far but they could have bettered the battery, at least. While a mild user might not have any issues with the on-time of their device, the heavy users will be quick to notice that this 2940mAh Li-Po battery won’t get them through the whole day except with periodic charges. 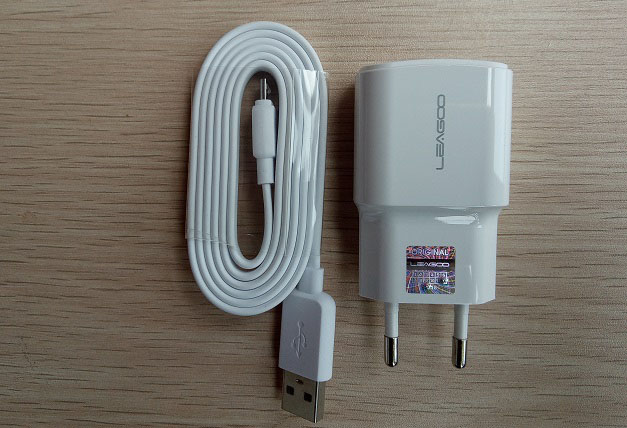 The Leagoo S8 is a dual micro SIM phone with a hybrid slot. The good news is that it supports 4G networks in addition to the conventional 2G and 3G connectivity options. 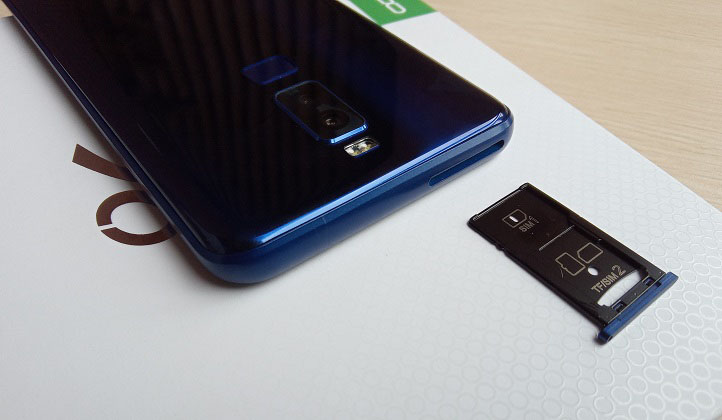 Wired options include a microUSB port and a 3.5mm jack earpiece. The microUSB port supports USB On-The-Go so it can be used to attach an external accessory, flash drive for example.

If you are looking for a good alternative to arguably overpriced high-end models, the Leagoo S8 turns up for you just fine. Combining the aesthetics of Galaxy S8 and a top-shelf design as well as practical functionality, this is one unit that is here to stay.

Selling at less than #42,900 (120 USD) from various merchants, you will soon find out that the device is quite a steal.

Some notably impressive areas of the device include;

Some of the downside includes;

At the price range of NGN42,900 – NGN45,900, the Leagoo S8 is truly worth checking out. It costs far less than the likes of Infinix S3 and Tecno Camon X devices.

Where to Buy LEAGOO S8