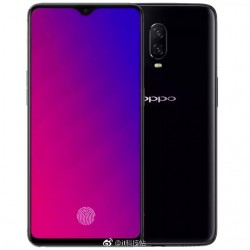 When we first reported about the upcoming Oppo R17, one of the things that we couldn’t quite place our finger on (no pun intended) was where the fingerprint reader of the phone would be placed. There has been a couple of images that showed both the front and back of the unit and of course, we were missing that little sensor cut-out on the back.

If the new leak today is anything to go by though, the fingerprint scanner will be in a much more coveted location – under the display. 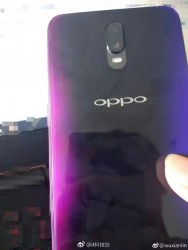 One thing that makes us wary of believing this information is that the images shown now do not agree with what we got from the TENAA certification. You will be able to confirm that yourself if you check the arrangement of the dual camera units. While there could have been some mix-up in the news, we tend to believe what we get from TENAA than from any other random source.

It is not impossible that this phone goes the way of Oppo’s F9 Pro in the way of arrangement of the dual cameras. That would even make the Oppo a better competitor to the OnePlus 6 which has the same arrangement as what we are just seeing.

For now, though, you are allowed the excitement of thinking the in-display option will be on the Oppo R17. Another thing you are allowed is the taking of this news with a pinch of salt till we have more official sources to confirm from.

Over to you, would you rather the sensor was under the display or put at the back of the phone?