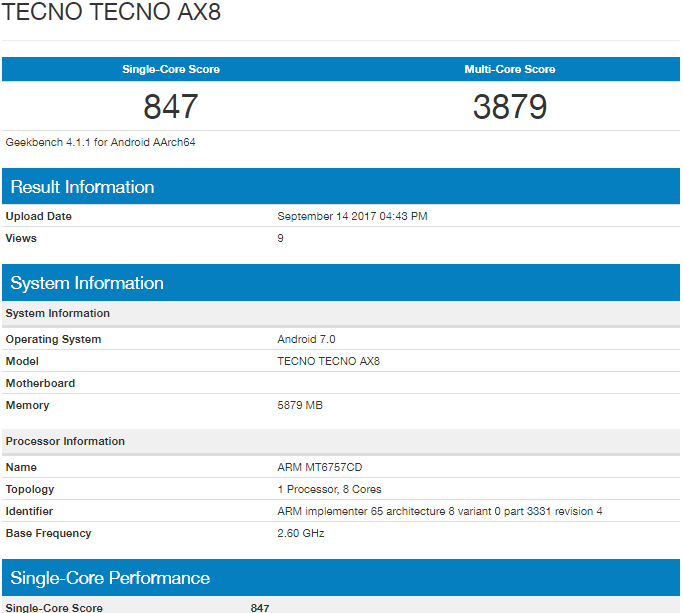 A new Tecno phone with the name Tecno AX8 has been spotted on Geekbench, which suggest Tecno is gearing up to launch a new phone.

From the Geekbench leak which dated September 14, it can be seen that the device is equipped with 6 GB RAM, Android 7.0 Nougat and MediaTek Helio P25 (MT6757CD).

Helio P25 is a premium MediaTek chipset that is based on 64-bit ARM Cortex-A53 architecture. The chipset feature 8 processors, with a processor speed of 2.6 GHz and with support for dual camera.

This suggest that the said Tecno AX8 may feature dual camera with each being 13 MP.

The Helio P25 is built to support a maximum display resolution of 1920 x 1080 which means you shouldn’t expect anything more than that on the device.

The chipset is equipped with ARM Mali-T880 MP2 GPU with a maximum GPU frequency of 1GHz.

Recall that this is the same processor that was spotted in Infinix Zero 5 Geekbench leak, meaning that the device will likely have similar specs to Infinix Zero 5.

This leak of the Tecno AX8 may mean that we may see two more smartphones from Tecno this year as Tecno Phantom 7 has already appeared on Geekbench as well, but comes with a more powerful Helio X30 SoC (System-on-Chip) instead.

It is not yet clear what Tecno’s plan for the Tecno AX8 is yet but we will keep you posted as we gather more information on that, so stay tuned.