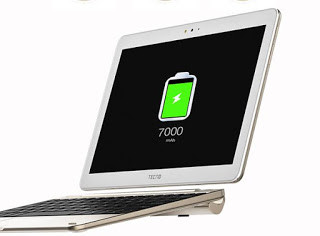 Tecno DroiPad 10 Pro II is the first tablet from Tecno to run the Remix OS from Jide Technologies; a new OS that combines both Android and Windows platform functions on one device based on ARM architecture an Android-x86.

The Remix OS is made by Jide Techs which comprises of three Ex Google workers. The OS is known for its smooth combination of  both Windows and Android functions in one device and it is basically meant for devices with big screens (mostly tablets).

With the Tecno Droipad 10 Pro II , you have a feel of both windows 10 and android operating systems coupled with other interesting functions such as: Multitasking with multi-windows, Physical Keyboard Optimization, Keyboard Shortcuts, Full App Ecosystem, Touchscreen Optimization, Resource Efficient Operation, etc.

The DroiPad 10 Pro II is beautifully designed with a metal material, It features a massive 10.1 inches IPS display size with a resolution at 1280 x 800 pixels and a pixel density of about 365 pixels per inch to let you enjoy amazing viewing angle when watching movies or playing games with tablet.

The DroiPad 10 Pro II comes in Champagne Gold and Silver colour options, the device uses an 5-megapixel rear camera with a LED Flash while at the front, you’ll find a 2-megapixel secondary shooter with soft flash for video calls and selfies. DroiPad 10 Pro II supported networks include 2G/3G/4G LTE.

With free 32GB of internal storage space, you won’t worry much about space to save your photos and all other media files. Apart from that, you can also expand the memory to up to 128GB with an external SD card.

This new Tecno DroiPad 10 Pro II is powered by quad-core processor clocking at a speed of 1.3 GHz, supported by a 2GB of RAM which is averagely okay to give you a seamless phone usage and lag-free performance.