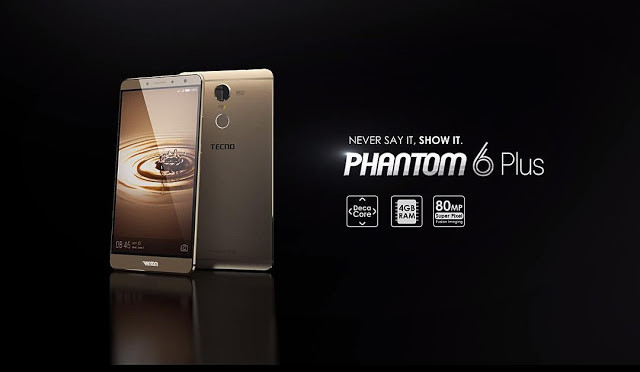 Tecno Phantom 6 Plus has finally been released and the specifications is almost outrageous compared to other MTK (MediaTek) devices in Africa Market.

It isn’t a joke, what you planned and made for good 13 months has to be something murdering, phantom 6 plus proves the be the result, it has an awesome display with glaring design, I wonder if one could see this and not fell for it.

Apart from Tecno phantom 6 awesome battery and security we have other outrageous features that made the device the real phone to be, these features are listed below.

5 Irresistible Features Of Tecno Phantom 6 Plus

This is just the bomb a 6.0 Inch tablet is so much comfortable walking around with, you don’t need to get your tablet PC while traveling, Phablet has almost all the same features as the tablet and mind you a phablet always emerge with nice specification.

No one can doubt me there, Tecno phantom 6 plus is capable of bringing a bigger display means, Better video viewing experience, Easier multitasking and Can replace small tablets.

Specifications featured with it is the 64GB ROM, 4GB RAM, 6.0 Marshmallow, Iris and Finger Print Scanner and a little dangerous 4,050mAh, Tecno Rocks.

Why would I talk of this, I’m really tired of getting my phone broken while it fell, you should tell me to sleep, NO, Tecno Phantom 6 Plus has taken all the worries away, it has a 5 Layer Metal Body that provides long durability.

What are this Layers the adds up to the body, the body is made up of a Nano molding seamless, metal uni-body, a firm fastener, a non-detachable battery design , and an aluminum magnesium alloy frame, Not only that just like Infinix the screen is protected with v3.0 corning gorilla glass which protects your device from heavy fall, N100,000 is no joke Man!

There are worst cases where 13MP Camera won’t be Sharper even compared with 5MP camera Sony Made, You would believe me there, right? What would you be thinking if a 21MP Camera was made by SONY then it’s a wow!

No more worries about night parties then no matter how dark it is then a 21MP Tecno phantom 6 camera should take care of it, Not Only that a front facing camera can be used to take bright pictures at night, don’t tell me an 8MP camera with LED Flash isn’t enough for that.

Though we should now be eyeing on Helio X30 Mediatek Release but that’s not a matter on ground, Tecno Phantom 6 comes with a decacore Helio X20 chipset which covers fast multitasking and an efficient battery.

When Helio X20 was revealed, it was said that it saves battery by 30% even after its high end performance, the chipset is not left out, A 4GB RAM supports the phone for easy multitasking, 64GB ROM is also there but a slight headache here is it does not support an SDcard.

Tecno Phantom 6 Rather use the Hybrid SIM Setup this means you either have the choice to remove one SIM slot to replace an SDcard or you don’t use SDcard at all.

This is exactly what I’m waiting for in Tecno phone release, Tecno phantom 6 plus spots the first out of Tecno phones to have it.

You are now assured fast data transfer rate of up-to 10Gbps also a fast charging functionality and a bi-directional power transfer, this means apart from charging the peripheral device, when applicable, a peripheral device could also charge a host device.

That’s all for the five Outrageous Features Of Tecno Phantom 6 Plus, Seen other irresistible features I’ve not mentioned up there kindly put it across via the comment box, thanks for reading and kindly share the post.

This review was Authored by Ayandoye Pelumi Olawale, he blogs at NaijaSpecs.