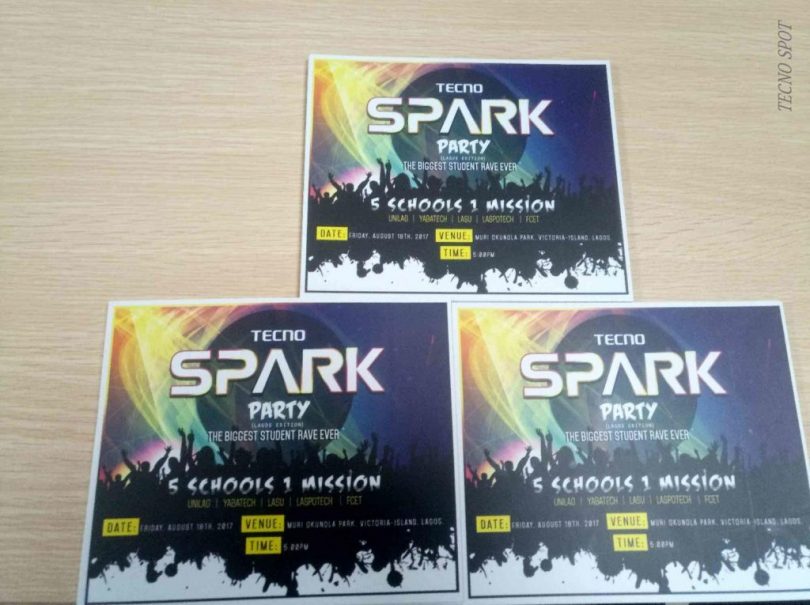 The Tecno Spark series are launching today Friday, August 18 and Tecno is throwing a party.

The launch party seems to be for students and youths. This is not surprising as Tecno was said to be targeting the youth market with The Spark series.

Tecno promises that the launch party will be “the biggest student rave ever” as students from 5 major colleges in Lagos including UNNILAG, YABATECH, LASU, LASPOTECH and FCET are expected to be there. There will also be a lot of eating, drinking and dancing of course.

The launch party will be taking place at Muri Okunola Park, Victoria Island, Lagos. Time is 5 pm till Mama Calls.

If you are in Lagos and wish to attend the Spark party, there is a chance for you to get an invitation.

Tecno is giving out invitations to the first 50 fans to comment “I’m coming” on this post on their fan forum.

All you need to do is to visit the page, login and comment “I’m coming”. If you happened to be among the first 50 persons to do that, you will get an invitation.

On the other hand, the Tecno K9 (Tecno Spark Plus K9) will sport a slightly bigger screen with 6.0-inch display but with the same screen resolution.

From the specs overview above, it can be seen that the major differences between the two Tecno Sparks are the screen size, number of processors, RAM size and the battery capacity.

Tecno is yet to announce the respective prices of the two phones but we expect that to be revealed during the launch.

You can learn more about the Tecno K7 here and Tecno K9 here.

See you after the party! 🙂