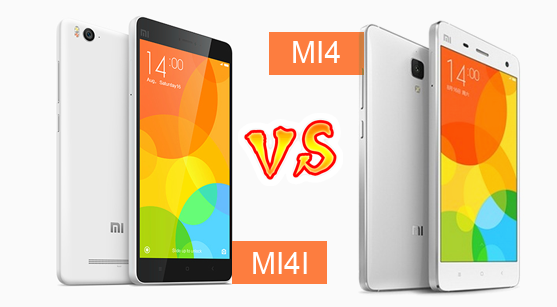 When it comes to new phones, is either you choose a brand that has been well known or you might try something new where you get a lot of funky features. However, people, usually, hesitated going for the latter option, until now. With the addition of new and improved brands such as the Xiaomi Mi 4i, there has been a considerable amount of growth in the smartphone market.

Xiaomi is certainly said to be one of the most popular Chinese brands available today. And, their flagship devices are definitely worth looking at. But, there is always a challenger coming up to race against a device and the company’s very own Xiaomi Mi 4 has taken a spot on our list for being Xiaomi Mi 4i’s competitor.

When there are phones where people have to decide the minutest details, it really gets hard. And, that is where reliable reviews like this one will help you get a good look at comparable attributes of the two phones. With the Mi brand logo on the two phones, customers usually think that the two will have a lot of similar aspects. But, there are a few key differences which make the two phones quite apart. Discussion for both can be seen in detail and the winner can, therefore, be decided for the one that will truly stand out on top.

Taking a look at the design and material used for the two phones – the Mi4 gets a metal finish, which is more of a glassy body. It surely offers a premium looking device, which makes one awe at its certain beauty. On the other hand, the Mi4i features a unibody made of polycarbonate that can be obtained in matte as well as the glossy finish. Seeing the plastic built might make some of you hesitant to buy one. But still, the quality of the plastic is not that bad. If you are familiar with design and material selectivity of the iPhone 5c, then you can surely understand what the Xiaomi Mi4i would feel like in the hands. But, being plastic has a great advantage. You get a number of color variants in the Mi4i, which are not available in the Mi4. So, it’s a matter of choice and likings for the design part.

Now, when the displays are seen – both have a 5-inch display with 1080p. However, the quality of the display on the Mi4i might look crispier. This is due to the “Sunlight technology” that has been added by Xiaomi to their phones such as the Mi4i. However, this technology is absent on the Mi4, which is why its display might not look as high in quality as the Mi4i.

Looking at the processors, you get a quad-core 2.5 GHz Snapdragon 801 processor in the Mi4. The processor is supported by 3 gigs of RAM while the Mi4i comes with a 64-bit Octa-core Snapdragon 615 processor. The RAM in this one is 2 GB. Internal memory in both phones is 16 GB. Also, you do not get an expandable memory slot in any of the phones. You do get the Mi4 in a 64 GB variation. The Mi4i, on the other hand, is still being though over by Xiaomi for a 64 GB variation. Performance wise, it was found that the Mi4 with its 3GB RAM is able to work pretty quick than the Mi4i. This allows people to perform multi-tasking at a faster rate. But, this difference cannot be judged unless both phones are simultaneously used for opening and closing apps. A more precise difference between the performance-based numbers was found through Antutu benchmark tests.

The primary camera in both the phone is 13 MP. But, you get an 8 MP front camera on the Xiaomi Mi4 while you get 5 MP on the Mi4. Even though both have 13 MP cameras, the sensors in both are different. The Mi4 offers a camera sensor that is mostly seen in phones like Samsung. The camera has an f/1.8 aperture with Chroma flash module and 6-element lens while, the Mi4i has a Dual-tone sensor with Dual-LED flash. Its camera lens is also one of the ones used in Samsung phones, and it comes with f/2.0 aperture accompanied by the 5-element lens.

Surely, the above details would have helped lower your confusion about the two phones. While one is offering a higher performance, the other offers a better design, etc. Most of you might look up for a phone that had the best features of both. And, phone lovers usually expect that from brands. Nonetheless, the two phones are quite exemplary in their own ways. HD screen to battery life, and any in between are all properly offered for a great use.

Make sure you check out both phones and understand what all they feature and how well they perform. Besides that, the price difference in both is also varying. The Mi4i is available at 235 USD in the market while the Mi4 is for 320 USD. If you can sacrifice 1 GB of RAM for the price, then you can do that. Overall, you get a great number of features in the two phones. So, choose wisely.