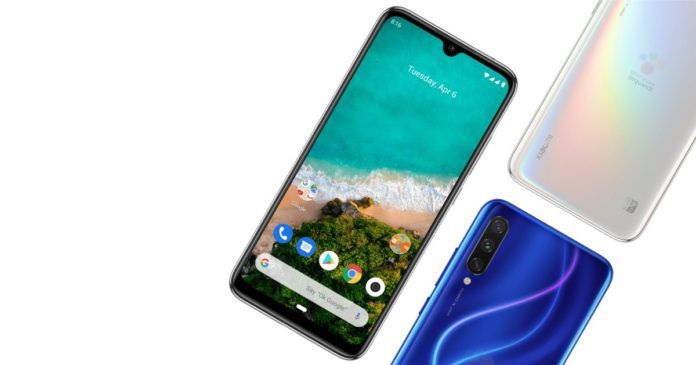 With more than 32 million smartphones shipped in the second quarter of 2019, Xiaomi became the fourth-biggest smartphone maker in the world. This shouldn’t come as a surprise, as the Beijing-based manufacturer is focused on quality, delivering reliable and high-performance handsets, while keeping their prices at an affordable side, often being accused even of selling smartphones at a loss to gain market share. One of Xiaomi’s most recent releases is the Mi A3, its third Android One smartphone since 2017. Let’s take a look at what this new handset has to offer.

The Mi A1 and the A2 both had metal unibodies – the manufacturer took this risk at a time when most of its competitors switched to a glass back. The A3, in turn, takes no chances: it too has a glass back in tune with today’s trends. Its front is covered in Corning’s Gorilla Glass 5 in a plastic-covered metal frame. Its screen to body ratio is not ideal but after a bit of getting used to, it is perfect for its 6″ screen.

The phone is narrow enough to be used while keeping a firm grip on it, even when using with one hand – the hardware buttons on its bottom can be reached by an average-sized hand. It has a discreet notch on its front for the selfie camera.

The Mi A3’s screen resolution is a bit low for 2019 – 1560 x 720 pixels is not great for a 6.01″ screen, with an aspect ratio of 19.5:9. The screen is bright, with vivid colours, and a solid contrast, even in sunlight. It’s a Super AMOLED, after all. The difference between its HD screen and an FHD is only visible in special cases (like reading text on a grey background) and it’s not at all disturbing.

The specs of the Mi A3 are pretty standard for its price range: it is powered by a Qualcomm Snapdragon 665 SoC with two 2GHz cores and six 1.8GHz cores, paired with an Adreno 610 GPU, 4GB of RAM, and 64 or 128 GB of internal storage. This is the perfect compromise between performance and power saving, offering enough performance for online slot software developers and first-person shooters alike while keeping heating and power-eating at a minimum.

This hardware configuration is quite the power-saver which, paired with the 4030mAh battery (with fast charging), is a killer combination. The phone is capable of playing video for more than 17 hours, beating ASUS ZenFone 6 and its 5000mAh battery. It needs around 2 hours and 20 minutes for a full charge (at 18W) and charges the battery to almost 30% in just 30 minutes.

The phone comes with goodies like a 3.5mm audio jack and FM radio, Bluetooth 5.0, and high-speed, dual-band WiFi. It can accommodate two SIM cards, and it is capable of high mobile broadband and WiFi speeds.

The Mi A3’s triple camera is decent, to say the least, for its price range: it comes with a 48MP primary camera joined by an 8M ultra-wide lens and a 2MP sensor for portrait shots. It does great in the daylight, and it comes with a dedicated “Night Mode” in its camera app that turns night shots into usable ones. Overall, it’s not great but it’s good enough for its price range.

The 64GB version of the Xiaomi Mi A3 costs close to N70,000 and the 128GB version, around N80,000 at the time of writing (Jumia). Considering its price range, its performance and configuration are great – it is a solid phone that will do its job well and not cost you an arm and a leg.