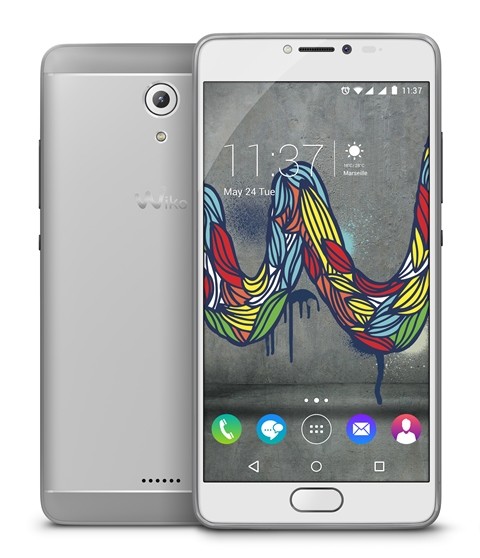 The Ufeel Fab design is the most attractive of all the Ufeel series of mobile phones, it is clad in a metal body with brilliant finish to privide for easy handling.

The smartphone runs Android 6.0 Marshmallow Os and ticks on a quad-core processor speed running at 1.3GHz. It has 2GB RAM and 16GB built-in storage which is expandable to 64GB via a MicroSD card.

Wiko Ufeel Fab crams a big 5.5-inch IPS display that helped see it into the phablet world of smartphones, the screen sports a resolution of  720 x 1280 pixels. The On-cell technology built into the screen lets you enjoy image brightness and great visual experience. The screen is protected by 2.5 curved resistant glass.

At the back, Wiko Ufeel Fab packs a 13MP rear camera with Autofocus and LED Flash for great photo and video recording potentials while the front camera is equipped with 5MP and LED flashlight.

The inclusion of a Fingerprint sensor in the Ufeel Fab makes the device standout from other Wiko branded smartphones in the Ufeel lineup. This feature offers increased data security and can also assign tasks to your five fingers with each of them identified for the specific task assigned to it.

Wiko Ufeel Fab also allows you to secure sensitive files or app behind a fingerprint. You can store private files in encrypted boxes that only you can open using your fingerprint.

As a 4G LTE smartphones, Wiko UFeel Fab gives you seamless access to fast internet and download speed while relying on a 4000 mAh battery to keep the light on for longer hours. The device is dual SIM based with dual stand by both slots.

Price in Ghana should start any where from GH₵ 760. Wiko Ufeel Prime Price in Kenya is expected at around 18,000 KSh